Vanilla vanilla vanilla. It is my favourite flavour hands down. The two cakes below are the same cake recipe, but frosted with different types of buttercream. I didn’t even know there were different types of buttercream…but there are, and you should know them. The pink buttercream is American Buttercream. American buttercream is sweet, with about 4-6 cups of icing sugar per 1 cup of butter. It can also be kind of grainy, and sickeningly sweet. The white icing is called Flour Buttercream, or Ermine buttercream. It is made by creating a roux out of flour, sugar and milk; letting it sit to make a pudding, and creaming it into butter. It only has about a cup of sugar per 1 cup of butter. It is smooth and sweet, but not sickeningly sweet. I like Ermine. 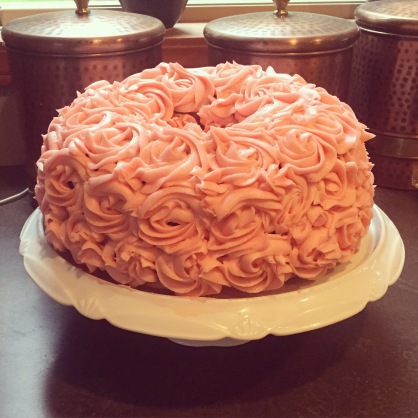 I have not perfected my buttercream, so I can not put a recipe on the blog yet. I have, however, a really great vanilla birthday cake recipe! It is based off the vanilla cake recipe from New York’s famous Magnolia Bakery. I made a few changes and lightened it up a bit. You can’t even tell.

The Magnolia Bakery’s cookbook calls for 1 cup of butter, but I prefer to have my butter in the form of icing! I lightened this recipe up using….YOGURT! Yes, again. Good thing i’m no longer vegan. 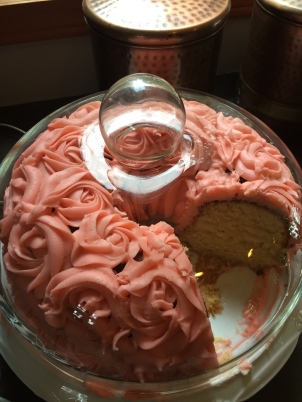 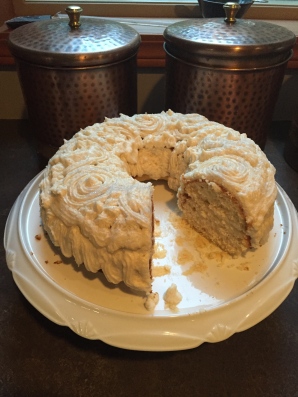 3.) Add eggs one at a time, beating well. Add yogurt and vanilla.

4.) Beat in flour, alternating with the milk. Mixture should be light and creamy. It tastes amazing too, so lick the bowl- what’s a little salmonella? Yolo.

6.) Flip out of pan and onto a cooling rack after 10 mins out of the oven.

7.) Great with buttercream! Do NOT frost until cake is totally cool. I have learned this through experience :).