I feel as if this is the post i’ve been dreaming of writing for 3 years: I went skiing! In fact, we’ve skied a tonne throughout December and January! My final university exams ended on the 12th, which left a lot of time for fun in the mountains. I was a little nervous to get back out there, as backcountry days are a pretty big physical and mental effort. It felt so natural, though, and my lovely dad made sure that the first day we went out was chill and fun. The group was me, papa Mike, and Mike Danks from NSAR. I couldn’t have asked for a better group, or day, to have my first ski. It was a bluebird powder day, with only a touch of wind affected snow at the peak. The conditions were right, and it turns out that I didn’t lose all my skiing abilities 😉

One of my favourite things about the mountains is how objective they are to human presence. It is extremely humbling to be in the backcountry. It’s a physical and mental game playing in the mountains. You have no idea what is going to happen because the mountains give no shits about you! Watching avalanche conditions, weather, and managing your own health: heat, hunger and energy, is crucial in the backcountry. It feels right to surrender to nature, though, as we constantly see how devastating our impact on the earth is. 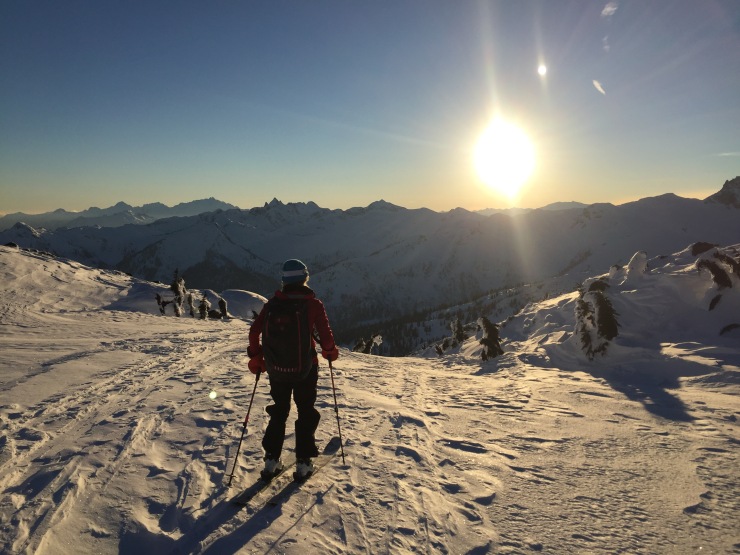 My final thesis course at UBC is actually about Climate Change! I just learned the term anthropocene, which means “human era”, in other words, the era of time in which humans have drastically altered the planet. We have affected earth more than any other species throughout time with our carbon consumption. Roy Scranton’s book Learning to Die in the Anthropocene is a good read. He suggests that humans must learn to retire our carbon based, infinitely expanding economy in order to continue life on earth. Living in the anthropocene, according to Scranton, demands a completely new way of life, one where instead of constantly expanding and consuming, humans instead become co-creators with the earth. Unfortunately, the book is pretty depressing, especially considering the current political climate.

We’ve skied lots of different snow this season, too. The first three days were dreamy…fresh, light (coastal light), powder. The 4th day was special in so many ways, but also challenging for me. The group was me, PM, Shane, Casey, and QUINN! I was so stoked my brother Quinn decided to come out with us. I have such respect for his chill competency, whatta guy. The powder was so deep that day that breaking trail was tough, but so was skiing! It was so hard to make turns, and if you didn’t commit, you fell!! As a perfectionist, I hate falling, and I am also very hard on myself if I feel like i’m not skiing to the best of my ability. It was a challenging and humbling day in the mountains for me. But, I was surrounded by my favourite people, so it was one of the best days ever, despite its challenges 🙂

My goals were to ski on both Christmas eve and New Years Day, and both were accomplished. My Christmas eve ski was made very special by both the company and the conditions. Bluebird, cold, clear, light powder defined the day.

New Years day was not as dreamy for me, with 70km/hr winds we couldn’t ski where we usually do, and also, there may have been some drinking the night before…but it was a learning experience and still super fun!!

Each day I went skiing was so special and different. The most recent was pretty great, though. The winds were high, again, so we had to make some compromises, but the skiing was AMAZING. Super skiable powder, which was a bit sun affected, but really really fun to ski. We did four runs, and I was instantly on cloud 9. The group was awesome too. It consisted of me, Shane, my gal pal Brylee (so nice to ski with another girl after playing with boys all the time!), PM (Papa Mike), Eric Hjorleifson (name drop), and his friend James. It was so cool skiing with Hoji…he has so much knowledge, and also he said that my ski touring cookies were the best he’s had…I mean…how cool is that!? We also dug some preliminary pits, which showed some serious slabbage!! I have taken both my AST 1 and AST 2, but I find just following and learning from experienced skiers like Hoji and my dad so much more in the moment than a course (even though the courses are AMAZING and I highly recommend them).

Other than skiing, Christmas was great! It was intimate this year, with just the four of my immediate family members. We cooked dinner and went for a family walk. So much love, no family drama, and chill vibes, it was lovely.

On a personal growth level, I am in a serious period of transition. Rather poetically, I feel as though my rehab finished in December 2016. It took about a year, from Jan-Dec, of working every day on evening out my leg and body to get to where I am now. I still have nagging aches and pains in my muscles, but it’s only because my activity level is so high- not because i’m injured. Emotionally, i’m totally ready to get back to normal life, even though i’m starting slowly! I always knew January would be the time for me to begin the completion of my university degree, and also to look for jobs as well as explore what I want in 2017. It has come quick, though! It’s overwhelming getting everything back on track. It’s odd, I feel like i’ve done the hardest work i’ve ever done in the past couple of years, yet I have no money or anything to show for it! I need to keep perspective and remember how much i’ve learnt from my injury journey- I wouldn’t be the person I am today without it!

Originally I had wanted to go to grad school, but i’m seriously burnt out from school, so i’m planning on having fun for a while before considering it. My plan for 2017 is solely to enjoy myself, for once. I am trying to relax and let go of my perfectionistic tendencies which lead me to be extremely hard on myself. I am looking for a job now, and will hopefully make some money to do some travelling.

In relationships with others, i’ve also made some 2017 goals. People walk in and out of our lives each year, and this leads me to reflect on my relationships at the end of the year. When you go through something hard, you realize who will stand by you, and who may not have the emotional ability, themselves, to do so. It’s hard to stick by someone when they’re not at their best, especially when we’re all so young and have so much of our own shit going on! It’s totally understandable. That being said, i’ve learnt a lot about myself and the people around me this year. My goal for 2017 is to actually tell people how i’m feeling instead of bottling up my emotions. I also need to internalize and accept the fact that sometimes people won’t like what I actually think and feel, but that that’s out of my control!

I am very excited to see what 2017 has in store. 2016 was full of amazing people and dynamic relationships. There are some special people I would like to thank for making 2016 better, and the prospect of 2017 awesome. Keirra, our rides to school kept me at UBC, and your maturity, beautiful soul and companionship mean so much to me- i’ve been looking for a friend like you for ages! Mom and dad, thanks for all your support through this process. Momma you’re my best friend, and dad, i’m happy we can ski together again. Quinn, you’re the chillest guy around and i’m so happy you’re my brother. Holly, thanks for being a constant around our house, it’s so lovely to have a chatty pseudo-sister like you! Fraser, thank you for being there when I needed your support! My friends like Haley, Lauren, Nicole, Alana, Amanda and Jayne, I had my best christmas ever with you guys, i’m so happy we’re so close. Monique, I love you so much, I was so happy to see you this December, and come home quick. Kathryn, don’t lose your shine, you are a beautiful person inside and out. And lastly, but definitely not leastly, thank you for coming into my life Shane, I can’t believe I found someone as kind, smart and fun as you. I am crazy excited to do 2017 right with you and adventure up a storm. 🙂 ❤ 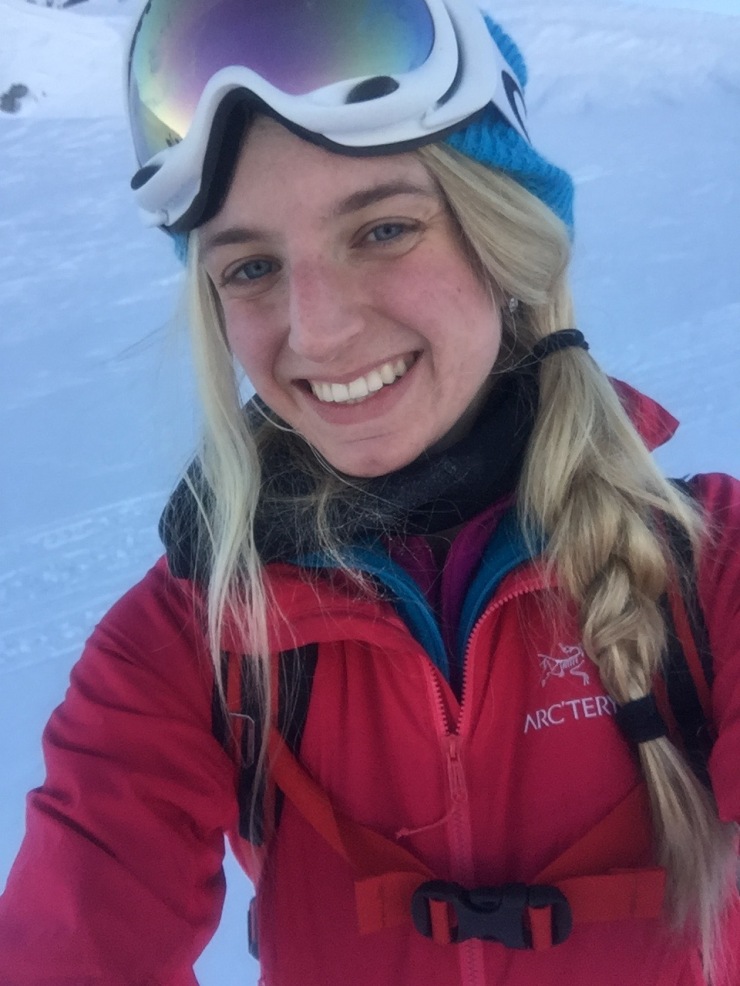